STORIES OF AN AMMUNITION SHIP TOLD BY HER CREWS

DISCOVER THE EXPERIENCES OF SUPPLYING AMMO TO COMBAT SHIPS AT SEA THROUGH STORIES AND PHOTOS AS TOLD BY THE SAILORS WHO MANNED HER. 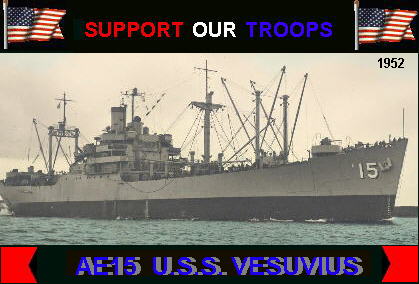 PRAISE THE LORD AND PASS THE AMMUNITION!
BEANS, BULLETS AND BLACK OIL
ON THIS PAGE

LINKS TO OTHER AE'S

Because of their volatile potential, it is customary for the US Navy to name their ammunition ships after volcanoes. Thus the AE15 was named, “Vesuvius” after an Italian volcano located on the western side of the Bay of Naples. Its most famous eruption, on 24 August 79 A.D., completely destroyed the city of Pompeii and the town of Herculaneum.

She was built by the Carolina Shipbuilding Company, Wilmington, N C and launched on May 26,1944. The United States Navy acquired her on July 4,1944 and she was commissioned on January 16, 1945.

Note: Cargo load capacity:  Designed for 6,000 tons  but present full fleet issue load during the Vietnam era was about 4,013 tons.

She departed for Okinawa on April10th where she became part of Service Squadron 6. In this role, she replenished ammunition to the Fleet in the waters around Okinawa. In July 1945, she joined a rearming group off Honshu, Japan, to support raids on Japan by the 3d Fleet. She detached on August 2nd and set sail for Leyte Gulf, Philippines. While there, word of the Japanese capitulation was received on August 15th 1945. The ship remained in the Philippines until 28 October, when she left for the United States. She was placed out of commission, in reserve at Orange Texas on August 20,1946. The Vesuvius received two battle stars for her service in World War II

In response to the needs imposed by the Korean conflict, the Vesuvius was re-commissioned on 15 November 1951. She arrived at Sasebo Japan on 3 May 1952 and, after voyage repairs, began supplying ammunition to the ships of Task Force 77 on patrol off the east coast of Korea until an armistice agreement called a halt to the conflict at 10 o’clock on the morning of  27 July 1953. All fighting stopped twelve hours later. The Vesuvius received two battle stars for her service in the Korean Conflict.

Over the next decade, she was to make 11 more extended deployments to the western Pacific where she serviced units of the 7th Fleet.

Near the end of January 1968, the Vesuvius on her return fromYokosuka Japan was recalled to the seas off Vietnam following the Pueblo incident. In March She returned to the states for repairs and training. By August 20th She began operations in the Vietnam area. During her deployment in the South China Sea and the Tonkin Gulf, the Vesuvius conducted numerous line runs in support of 7th Fleet operations. The Vesuvius received ten battle stars for her service in the Vietnam War.
August 14, 1973 the Vesuvius was decommissioned and struck from the Navy list

"THE AE15 USS VESUVIUS IS A GROUP WITHIN THIS ASSN."

AND GET INFORMATION ON THE UPCOMING

CHECK OUT THE  LATEST SHIPMATE

HERE YOU MAY JUST FIND THAT SHIPMATE

THAT YOU HAVE BEEN SEARCHING FOR

SHIPS OF THE NAVY BY PAT CLANCEY

SHIPS OF THE NAVY BY PAT CLANCEY

and a full page of links

The Korean War Project is Free To All...

U.S.N. - Together We Served

LINKS TO OTHER AE'S